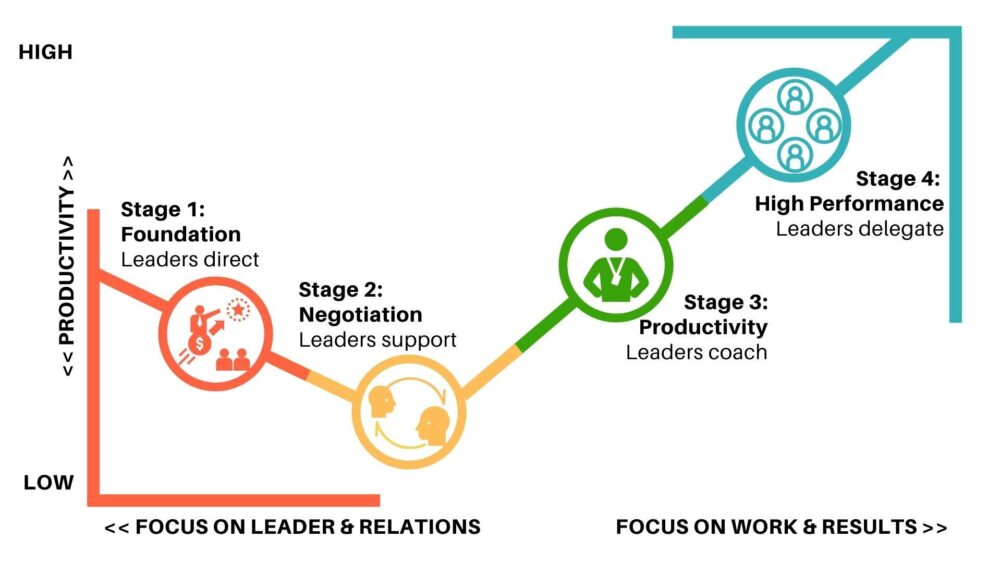 The 4 Stages of a Team

Teams, whether leadership teams or project teams, have different stages of development, similar to the stages of life: infancy, adolescence, young adult, and mature adulthood, for example. As teams are an essential part of any dynamic business, it’s wise to take note of what stage your team is in and how to prevent arrested development.

The good news is that there are effective tools leaders can use to get the most out of their teams in each phase of development. The slightly more complicated news is that these tools change for each phase of team development, from when the team is just formed (infancy) to when the team is a long-standing body (mature adulthood). That’s why it is critical that leaders be aware of the state their team is in and apply the appropriate techniques.

In the real world, CEOs and other executives often bring to their corporate roles certain assumptions about what it means to be a leader and what their leadership style should be. They believe that their self-designed best practice leadership style should work in every situation. This one-style-fits-all approach often breeds executive teams that get stuck, with team relations mired in either childhood dependency or adolescent conflict.

Recently I worked with the president of a regional bank, who told me he was frustrated because he truly wanted to delegate more to his direct reports, but somehow it just wasn’t “taking.” Using a proprietary assessment tool to evaluate his team, I helped him realize that his team, despite being together for over two years, was stuck in Stage 1, with issues typical of a team that has just recently been formed. The team members had not worked through the required developmental stages that allow delegation to be an effective leadership choice.

As clock-times continue to shorten in every aspect of business, teams are often required to go from start-up to delivery at lightning speed. The high-performing teams that can do this effectively provide a powerful competitive advantage, whether developing new products, running a bank branch, or leading a global enterprise.

Like human beings, groups mature through four distinct life stages and need distinctly different support from their leaders at each stage. In turn, leaders need to adjust their styles as groups develop. 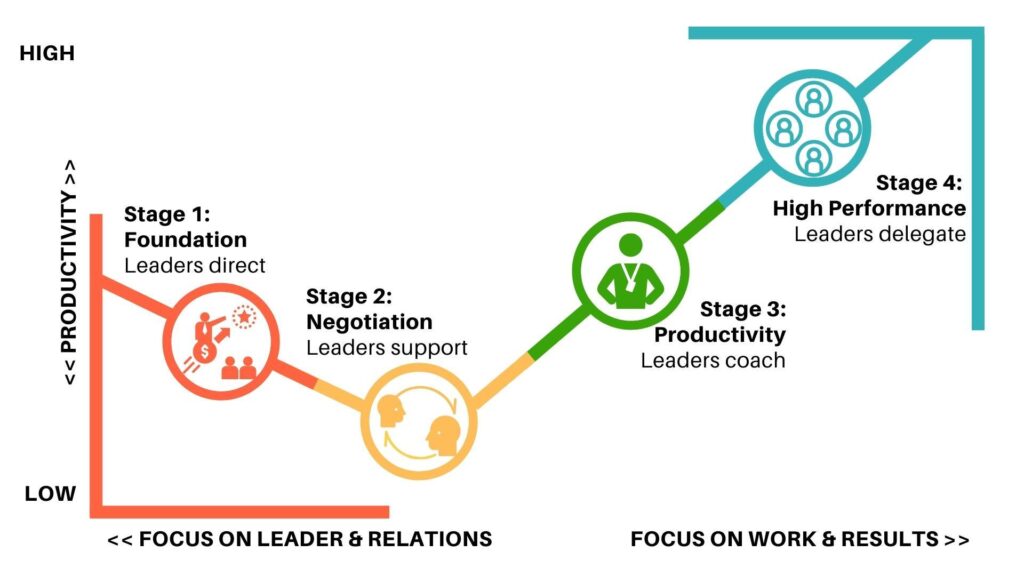 Only 10-15% of teams are “high performance” at a Stage-4 level. But all teams have the potential to become high performing if the leader is committed to assessing where the team is and addressing its performance barriers to dramatically improve productivity.

According to extensive research found in Susan A. Wheelan’s book, Group Processes, A Developmental Perspective, the first stage of group development is characterized by members’ dependency on the leader, as well as concerns about safety and feeling included.

Members comply with plans proposed by the group leader or by a powerful member. Group members often engage in activities such as exchanging personal or business stories that are not relevant to the task at hand. Members may also wait for the leader to make decisions, often urging the leader to take charge and tell them what to do.

In this stage, members seem more concerned with being accepted by others than with the task at hand. They tend to be overly polite and, as a result, are unlikely to express different points of view.

Leaders need to literally “take the lead” when groups first form. They need to set the overarching goal for the team and provide the structure. This is done through scheduling regular meetings, setting the agendas, and communicating to each member that they have a secure role to play on the team.

Leaders know they are doing their job well in this stage when they are seen as benevolent and competent. Direction is rarely challenged during this honeymoon period. If led correctly, groups can graduate from start-up through Stage 1 to Stage 2 in about two months. That’s how long it typically takes for a team to begin to gel.

However, up to 25% of teams never evolve from this beginner stage.

It may be tempting for a leader to continue this benevolent-dictator approach long after the team needs it.  A team has only reached a fraction of its potential productivity at this point, so it is counter-productive for a leader to maintain this seemingly blissful state.

In the bank CEO case mentioned earlier, there were other obstacles for the CEO to overcome in moving his team out of the infant stage. The bank culture, for example, excluded pointed debate and lauded polite interchanges. As a result, his leadership team remained in this leader-dependent state, unable to move on to Stage 2.

At Stage 2, the group seeks to free itself from its dependence on the leader and members express differences among themselves about group goals, how to solve problems, etc. Now the group’s task is to develop a unified set of goals, values, and operational procedures. This usually generates conflict and arguments are an inevitable part of this process.

A key aspect of this stage is increased participation by the team members. Thus, communication has moved from mostly top-down to a healthier give-and-take mode, both in an upward direction and at a peer level. Despite the potential for conflict and disagreements in this stage, team satisfaction actually improves from Stage 1.

The transition to Stage 2 can feel like the most challenging time for the leader. Their formerly polite and respectful team meetings are now characterized by seemingly irreconcilable points of view on issues. People don’t seem as cooperative and are challenging the leader for the first time. Tension can be thick.

For a team to develop through this stage, the leader must constructively resolve conflict to establish a climate of trust where members feel free to disagree. The leader’s role is primarily that of support for the team members through what can feel like a trying time.

Like a parent with a teenager, you want to encourage independent thinking, while guiding and modeling mature behavior. A fortunate team can navigate through this stage in about two months.

If a group manages to work through the inevitable conflicts of Stage 2, members’ trust, commitment to the group, and willingness to cooperate increases. Communication becomes more open and task-oriented.

The third stage of group development is characterized by more mature negotiations about roles, organization, and procedures. Members work to solidify positive working relationships with each other. Territoriality decreases as focus is more on the task and less on issues of status, power, and influence.

Leaders working with Stage 3 teams find that their job has become a bit easier. They are far less directive and now count on team members to keep meetings and work on track. Leaders often find themselves playing more of a coaching role to their team on skills like group decision making. Moving a team from Stage 3 to Stage 4 takes a minimum of two months.

As the name implies, Stage 4 is the high-performing team that everyone wants to be part of. The fourth stage of group development is a time of intense productivity and effectiveness. Having resolved many issues of the previous stages, the team focuses more of its energy on goal achievement and task accomplishment.

Although some work occurs at every developmental stage, the quality and quantity of work increases significantly here. Team members are excited to work together and esprit de corps is clearly evident.

The leader plays more of a subject matter expert role, almost at a peer level, as the team members have assumed constructive behaviors to keep the team performing well. This characterizes the delegation role that our bank CEO aspires to.

Mastering the Stages of Development

As outlined, it’s nearly impossible to go from Stage 1 to Stage 4 in mere months, and dangerous to your team to expect them to do so. It takes a minimum of six months to create a high-performance team. And relatively few teams ever reach this final level, as it requires that both the leader and group members be open to learning how to be leaders and members throughout the team maturation process.

If you’re leading a team that is struggling between stages, or you’re not entirely sure which stage you’re in, I can help coach you through total team effectiveness. Contact me to learn more.